After Easter things get pretty busy in Italy, especially in the capital and ancient city of Rome. The guidebooks and travel websites tell you that there isn’t a quiet time to visit Rome and the once shoulder seasons of Spring and Autumn are almost as popular as the Summer, still we decided that Spring was the best time for us and spending the last few days of our trip in Rome would be the perfect way to end the trip.

Rome is a city of concrete, marble and cobblestones, great for reflecting the heat of the sun back onto unsuspecting tourists. Coming from Queensland we didn’t think that the heat would be a problem, how hot could it get? The temperature moved between 24 and 28 degrees Celsius which is something that we’re quite used to, however we didn’t count on the impact of walking all day surrounded by concrete and other reflective surfaces which bounced the heat back at us. It didn’t take us long to realise that we needed to factor in more breaks and make better use of public transport, it is easy to see the sense in having a siesta or long lunch to escape the heat. Although we didn’t indulge in an afternoon nap or long lunch we had our methods for avoiding heat exhaustion:

In Spring the Spanish steps are decorated with large pots of brightly coloured flowers, sometimes azaleas but during our visit the geraniums were in bloom and the sight is spectacular even with the hundreds of people milling around and jostling for a seat on the steps. At the Victor Emmanuel monument there are no flowers and there no sitting on the steps, the monument is situated on Capitoline Hill and was built in honour of the first King of a unified Italy, it is also home to the Tomb of the Unknown Soldier and eternal flame. Should you dare sit on the steps then you will be reprimanded by one of the many security people on site, they loudly blow their whistles and make hand gestures so you know exactly what they’re asking of you. 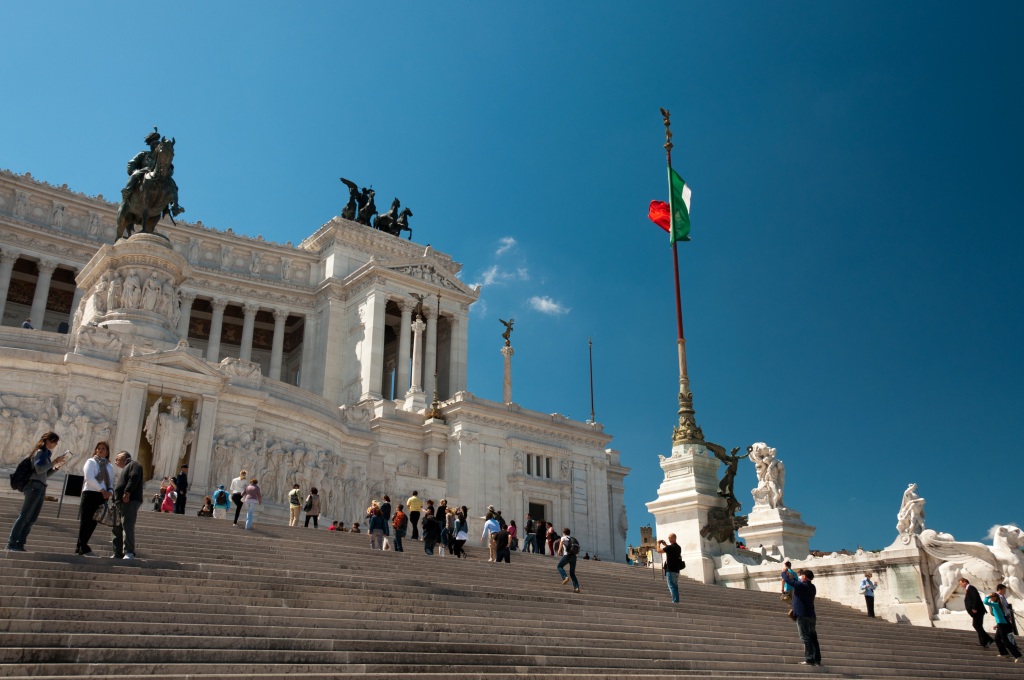 Wandering around the Roman Forum and Palatine Hill was made a little challenging for me, we experienced and extended spring shower and occasional downpour making it difficult to juggle my camera and an umbrella. Still, it didn’t stop us from exploring the ruins and although we were a little cold and damp, our enthusiasm and awe did not wane. One of the more beautiful areas of the Roman Forum, even when it is raining, is the House and Temple of the Vestal Virgins. The courtyard contains rose gardens and statues of the priestesses who guarded the the sacred, eternal flame which was considered to be the symbol of the eternal life of Rome. The priestesses served for 30 years and had to remain virgins for the entire time, to do otherwise resulted in death.

A number of special exhibits were set up throughout the forum, the focus was on the Roman Emperor Nero, more famous for his bad behaviour and murderous, corrupt ways than anything else. The exhibits are part of a trail of Roman locations that can be directly connected to Nero. The former palace of Nero, the Domus Aurea is closed to the general public as a result of buildings collapsing and a concern for safety. We followed the path that connected the forum to Palatine Hill where more of Nero’s story could be found. Much of the Palatine Hill is in such a state that you need to use your imagination or a guidebook to be able to identify the buildings, our aim was to head towards the Imperial Palace complex that overlooked the Circus Maximus. Looking at Circus Maximus now you would think that it was just a normal park suited for walking the dog or holding concerts but it was once home to chariot and horse races, events that attracted tens of thousands of spectators.

6 thoughts on “One Spring day in Rome”

Thank you for your comment, if you don't want to be notified of following comments on this post, please uncheck the Notify option below. Cancel reply